When I was studying Computer Studies at school in the 1980s we had a trip to a multinationals office in Liverpool (built escalators, I think!) and were shown around their computer areas – rooms that held massive main-frames and made a racket. It was quite dull at the time, except for the fact that at the end we were shown a printout that used ASCII characters to generate pictures on a dot matrix printer. They were great – Mickey Mouse & Marilyn Monroe were two of them. I got to keep one, but of course soon got bored with it and chucked it away. What an idiot! They were fascinating – I always wondered how they created those images. I still haven’t found out, but I did find a site which does something similar. Upload a picture to Text-image and you can convert it to an ASCII picture, like this. 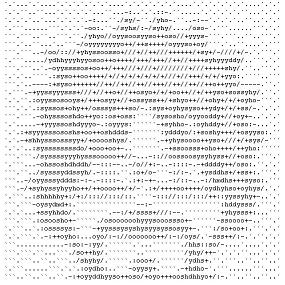 You can also convert it to something like this.

And this (the matrix effect). 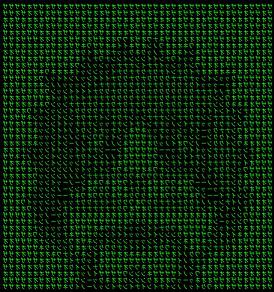 Now that’s cool. You can also tweak the parameters to give things a bit of variety, as well.

This blog is about presenting information – whether it’s “here’s a useful thing for you to look at”, doing something different with information, “wouldn’t it be good if?” and also library related ideas. I’m a librarian, computer fiddler (does a bit of programming), amateur musician, fan of retro video games and sci-fi / horror and I imagine that will come across here.

When I talk about information, I’m not just talking about words on a piece of paper or numbers in a spreadsheet. I’m talking about anything that can tell people something about a situation. Words, numbers, images, sounds, etc.

So come with me to No.1 Information-Twist House. What do you mean, “You don’t want to go.” Come on… I’ll pay you a nice shiny farthing if you do.

Founder member Voices for the Library.